A trio of musical talent swimming in Florida waters

The SHARK SISTERS are a fun, acoustic trio of multi-talented gal pals making waves and capturing hearts in SW Florida. Their heartwarming harmonies and unique mix of originals and classic folk, Americana, country and blues are sure to rock your boat.  Join this "jawsome" sisterhood as they share their innermost secrets about love, personal flaws, and life as a woman in today's world. 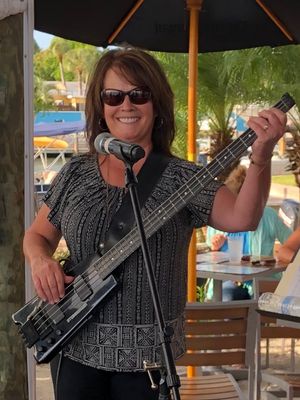 Meet P.J. Allman, newest member of The Shark Sisters, a "jawsome" acoustic trio that continues to make waves on Florida's Gulf Coast.  In February 2020, P.J. will join Brenna Larson and Coleen Marren in the fun, sisterhood of multi-talented gal pals performing a mix of originals and classic folk, Americana, country and blues favorites. P.J. joins the trio as Beth Travers departs to focus on her solo career with the release of her new album.

P.J. brings a wealth of experience and musical talent to The Shark Sisters. A Nashville recording artist, accomplished vocalist, bass, drums and guitar player, P.J. has earned numerous awards and nominations from the Country Music Industry including the Country Single Award for “New Vocal Group” of 1983, and has opened for Ricky Skaggs, Tanya Tucker, Jim Glaser, Con Hunley, The Whites and others.  P.J. is best known as the former leader of Chantilly, an all-female band that busted the Billboard charts seven times in two years before they disbanded in 1984.

"Having grown up singing gospel music with my sisters, and later launching a successful all-female band" says P.J, "Joining the shark sisterhood will be a whole ocean of fun to me. I'm really excited about being a part of the trio!"

Critics call P.J. a lady with style, flash, charm and a talent that leaves audiences aware that whatever trail she makes up her mind to blaze...she will. So swimming with sharks should be a breeze for her!

Check out P.J. with The Shark Sisters at one of our next events.